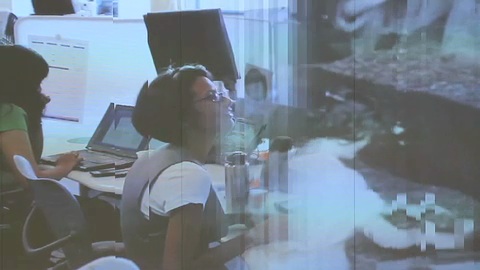 Shifting Time – San Jose is an interactive video installation that juxtaposes the past and present, where the viewer’s body becomes the interface to navigate between.  In this piece, commissioned by the City of San Jose for the new terminal of the San Jose International airport, viewers encounter a projected still image.  As they walk closer to the projection wall, the surface disrupts, pushing deeper into time in the pre-recorded video clips.  Archival film footage blends with high-definition footage from the present, and viewers are able to travel back and forth through time by moving towards and away from the projection wall.  Utterback’s software deconstructs the frame as the unit of playback, allowing multiple moments to appear simultaneously. This strategy speaks both to the possibilities of digital tools, and the dynamics of our fluid memories of places and moments in time.

Each clip in Shifting Time – San Jose incorporates historical footage of various sites and activities in the San Jose area during the last century, as well as complementary contemporary footage.  Some clips depict recognizable locations in the past and present.  Other clips show ways people work, travel, and socialize, and how these pastimes have changed or endured over time.  Multiple moments of time within each clip, as well as multiple moments of historic time, interleave and move back and forth with people’s movements. Moments from the past creep into the present – creating a visual metaphor of how history and our memories of a place affect our experiences in the present moment.