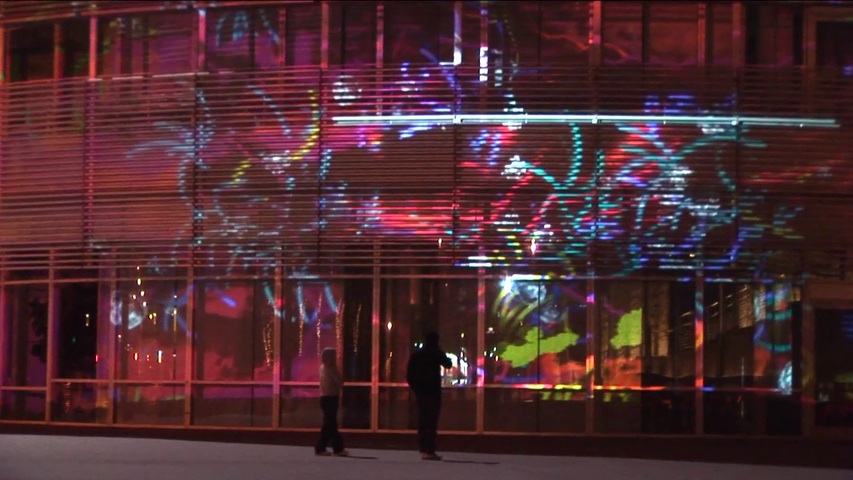 Abundance is a temporary public installation commissioned for the City of San Jose, California by ZER01 – the Art and Technology Network. At night, Abundance transforms the city hall plaza into an interactive social space. A video camera mounted on the City Hall captures the movements of people in the plaza below. A dynamic animation generated in response to this movement is projected onto the 3-story cylindrical rotunda. Utterback’s colorful, fluid and delicate imagery creates a subtle subversion of the bold geometry of architect Richard Meier’s building – warming and humanizing its surface.

As participants walk through the plaza they locate their brightly colored silhouette in the projection above. Pedestrian trajectories are inscribed to the background of the piece, while web-like patterns emanate from clusters of people. Movements and paths through the plaza become part of a collective visual record, and transform the building into a playful and dynamic canvas. All the visual elements in the projection result from people’s movements through the space.

During the course of the installation, Utterback added graphic elements and behaviors to Abundance – responding more specifically to the site and physical characteristics of the building. For example, white lines were added to the projection which align with slats in the building facade. As participants cross these lines, moon-shaped graphics are released and travel in a trajectory opposite the person’s movement. These flickering nodes become active elements of the composition – releasing further bursts of color when another person moves across them. Another added behavior distinguishes between individuals and groups – individual’s silhouettes are drawn in cool colors, and switch to warm colors when a group of two or more people form. Individuals moving in the projection erase the background color, while groups fill it back in.

A large variety of San Jose residents casually happened across Abundance as they walked, biked, or skateboarded through the centrally located City Hall Plaza at night. A typical excursion home from class, out to dinner, or strolling with friends became a chance encounter with an unexpected and ethereal piece of art.

By providing a way for participants to temporarily inscribe their movements on the facade of City Hall, Abundance personalizes the site, altering participants’ sense of ownership and belonging to a place that is already theirs as a public civic space.