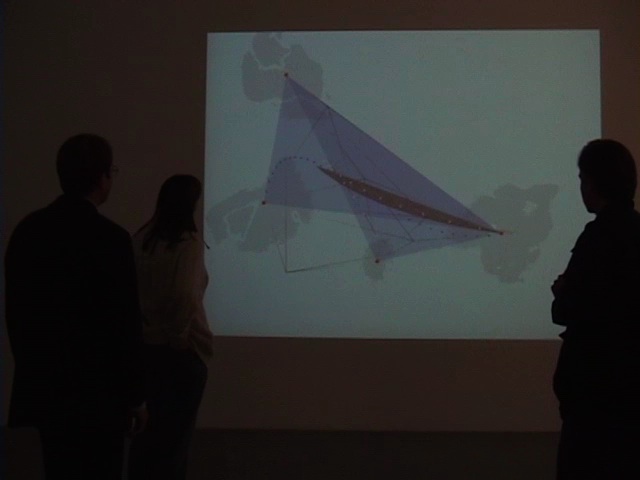 This interactive installation explores the possibilities of an projected kinetic sculpture that responds to people’s positions and movements using video tracking. The kinetic sculpture is a projected image, but the positions, velocity, and existence of various parts of the sculpture image depend on people’s positions and motions in the space in front of the projection. Some responses are direct and immediate, other types of sculptural momentum develop over time based on the overall flow of people in the space.

External Measures is a series of interactive installations that explore the possibilities of projected “kinetic sculptures” or “living paintings”. The positions, velocity, and existence of various parts of the projected image depend on people’s locations and movement in the gallery space which are tracked by an overhead camera. The piece creates unique dynamic drawings. Some responses are direct and immediate, other types of momentum develop over time based on the flow of people in the space. The complexity of the composition, and the presence of certain graphic elements, depends on the number of people in the space. A feedback loop develops as viewers choreograph their motions—first to explore the composition, then to direct it to their liking. The piece measures viewers’ motions and creates an external visualization of them. Viewers in turn monitor this external data and measure out their actions in response to it. An intricate dance between computer algorithm and human gesture emerges.

External Measures (Rectangle) and (Round), 2001

External Measures (Rectangle), is a rectangular projection. The elements of this composition include spindly gray lines—the number and orientation of which depend on the number of people in the space; a geometric blue shape that folds in on itself based on people’s locations; and a set of Bezier curves and shapes whose control points are linked to the total number of people and their motion. The actual forms of people in the space are represented as light gray smudges—residual pixels from the tracking data calculated by the software.

External Measures (Round), is a circular projection. People’s tracked forms are represented here by purple hatch marks that shrink and grow as they move. Red lines curve and snap between people like crazy elastic bands, creating a dynamic tension. Sets of horizontal black lines arrange themselves along straight lines between people—a calmer counterbalance to the dynamic red lines.