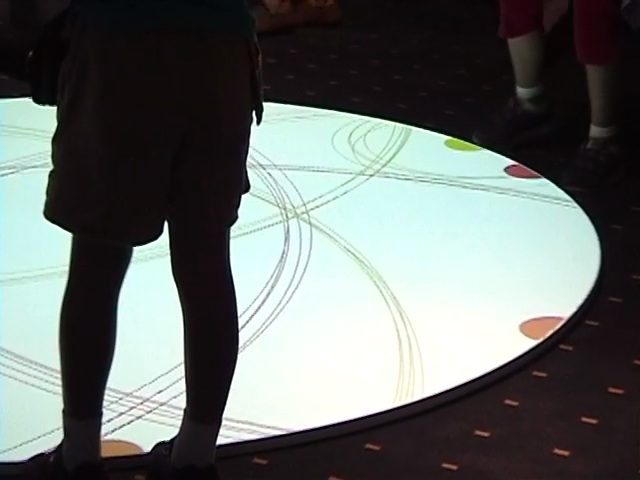 Arc Tangent is an interactive installation that activates the physical space between people by creating visual consequences to their bodies’ locations. As people approach a circular floor projection, dynamic real-time drawings are created based on people’s positions and movements around the circle. The piece cycles through a set of drawing modes that reflect various spatial relationships. One mode connects all the participants with modulating lines. In another, users’ physical positions take on strategic importance as their locations correspond to a ‘pong’ paddle in a circular version of the popular arcade game. The word tangent derives from the Latin verb to touch, and means ‘making contact at a single point’. The mathematical arc tangent function is essential to this piece’s ability to track locations around the circular floor projection. By visualizing the connections and distances between people in a shared space, this piece externalizes our constant negotiation of that space. By creating possibilities for drawing or game playing, the piece also alters what is at stake in the negotiation.