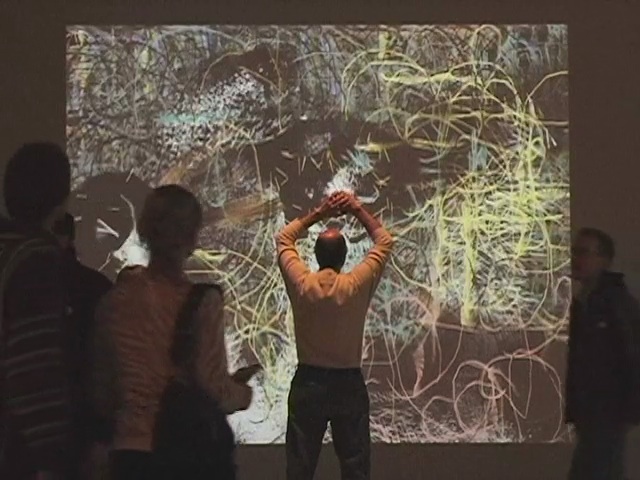 External Measures, 2003 is the third piece in a series of interactive installations which hinge the parameters of dynamic compositions to human motion in the gallery space. This piece creates a hypnotic tension between presence and absence, mark making and erasing, human gesture and algorithmic drawing.

Viewers first encounter a projection filled with meandering gray lines. When an overhead camera detects a person in the installation space, a black area that corresponds to their body creates a hole or absence in the field of gray. As lines hit the edge of this absence, they stop along its outline and change to a saturated color. When the person moves, the now-colored lines are released to resume their former trajectory, spreading a residue of the person’s presence throughout the composition.

While people’s presence erases and alters areas of the screen, their motions and relationships to other people generate new marks. Scratchy white lines connect each person to their original entry point in the piece. Subtle brown and black swaths are etched between any people in the space.

External Measures, 2003 tempts viewers to influence its composition, but ultimately reabsorbs all traces of their presence with its own incessant mark making. The meandering gray lines, originally felt as presence, invert to absence as they creep back through the composition, erasing viewer’s marks to a tangle of impersonal gray lines. Fleeting moments of human presence and motion are seemingly captured only to be lost again to the flow of time and computational processes.