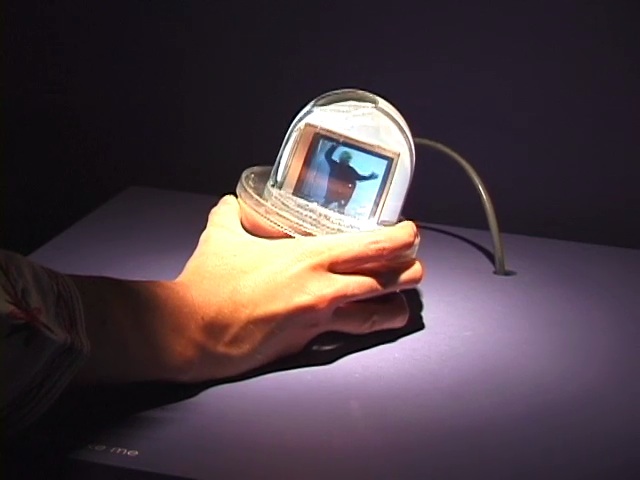 Potent Objects playfully examines the way we ascribe emotion to inanimate technologies. Potent Objects parallels current research in ‘affective computing,’ in which the capability of sensing and conveying emotion is built into computing devices. The work suggests that, though our machines may seem to be becoming more like us, the truth could be just the opposite. Potent Objects examines the tropes of interactivity as metaphors for human emotion. This project was funded by a 2002 Rockefeller Fellowship in New Media.

Potent Objects is a series of interactive objects that questions simplistic tropes of interaction while referencing the deeper emotional states implied by the physical grammar of interactivity. The objects explore our social anxiety about machines that can feel or emote, and our complex feelings about interacting with these machines. Are our machines becoming more like us as they learn to sense more about our actions, or are we becoming more like them as we tailor our actions to their limited sensing abilities?

Through the use of double entendres and plays on words, Potent Objects examines the tropes of interactivity as metaphors for human emotion. Each object is based on a word that refers to both a physical gesture and an emotional state. Some objects will try to ‘learn’ about certain emotions or interactive behaviors by capturing and incorporating users’ actions into the object’s own repertoire of ’emotion’.

Completed objects include Shaken and Balance. Other metaphors I might explore include: “held”, “hidden”, “blown away”, “slip of the tongue”, “thrown for a loop”, and “leap of faith”.

In the Shaken object, the physical gesture of shaking the device initiates the objects response of being ‘shaken’. This object consists of a snow globe with an embedded LCD screen and tilt sensor. The more the user shakes the object, the more momentum is added to a video of a woman shaking out of control. Future versions of this piece will incorporate video clips which evoke a first person depiction of being shaken or disorientated.

The Balance piece consists of a 4″x6″ LCD screen mounted vertically on top of a copper pole. The pole is attached to a scale-like base with long arms and sliding weights. Adjusting the weights along the arms affects the video on the LCD, causing a woman to careen off screen or to stabilize her fall. The tilt of the object in either direction corresponds to the degree the woman has fallen towards the floor. When the object is balanced, the woman comes to a stable position atop the object’s fulcrum.