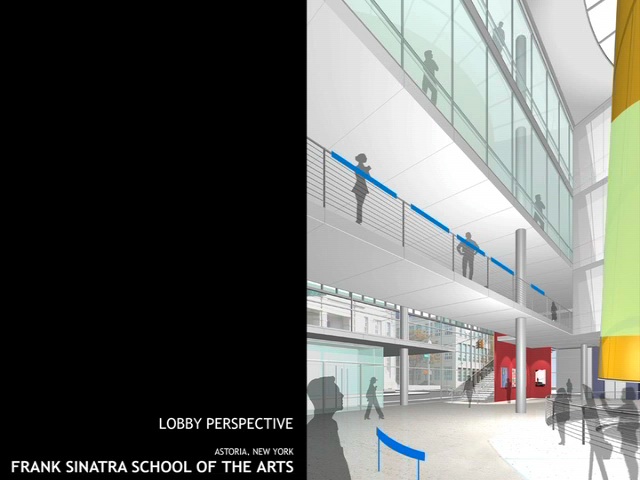 Play is Utterback’s proposal for the New York Percent for Arts Commission for the Frank Sinatra School of the Arts in Astoria, New York.  The goal of the proposal is to transform the high school lobby into an engaging and resonant space for students, staff, and visitors to the school.

Play turns the atrium into a multi-story ‘visual instrument’ played by touching railings on either the mezzanine or ground floor. Touch sensors along the railings allow people to influence a large projection across the bottom third of the curved auditorium wall. The dynamic projection flows, evolves, and pulses in response to the presence, location, motion and rhythms of people’s hands along the railings. The photos and video revealed and controlled are of students, details of their work, and things that they care about. Hands on the railing throughout the day create an ever-evolving collage and juxtaposition of imagery.

The goal of the project is to build a creative platform that will continue to exemplify, and influence the spirit of the Frank Sinatra School over time. As the playfulness and openness of this piece becomes part of student’s daily lives, it will inspire a sense of both place and possibility.