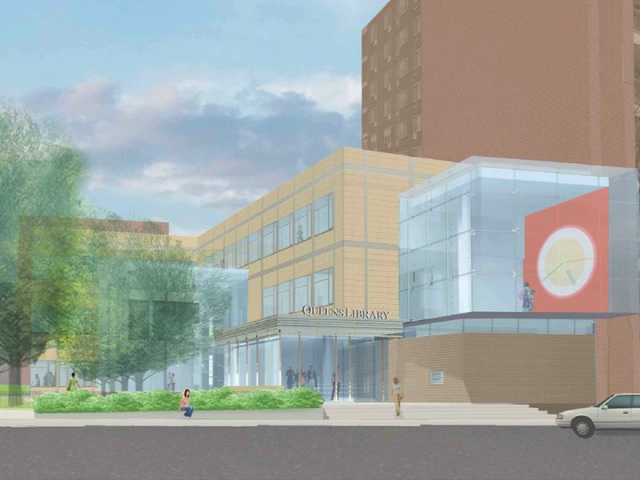 Chronicle is Utterback’s proposal for the New York Percent for Art Commission Elmhurst Library Project in Queens, New York.  The proposed piece is a dynamic projected clock where the hour, minute, and second hands are represented by quotes pulled from a database of literary texts.

The clock tells the actual time, but the quotes representing the hands change throughout the day as they move around the clock. When the hour hand is between midnight and one o’clock its text is selected from quotes containing the word ‘one’. When the hand passes one o’clock, it shifts to a quote with the word ‘two’. The number in the quote is consistently highlighted in a particular color to emphasize the hour. An LCD screen mounted elsewhere in the room displays the entire passage with title and author information for each of the three current quotes.

The animated elements of the clock are projected on a painted background which abstractly references a clock face, and creates a bold and colorful statement on its own. The artist will conduct experiments with various painted surfaces and projected elements to create the final design.

In Chronicle, clock hands become a serendipitous interface for browsing through the literary collection of the Queens Elmhurst Library.