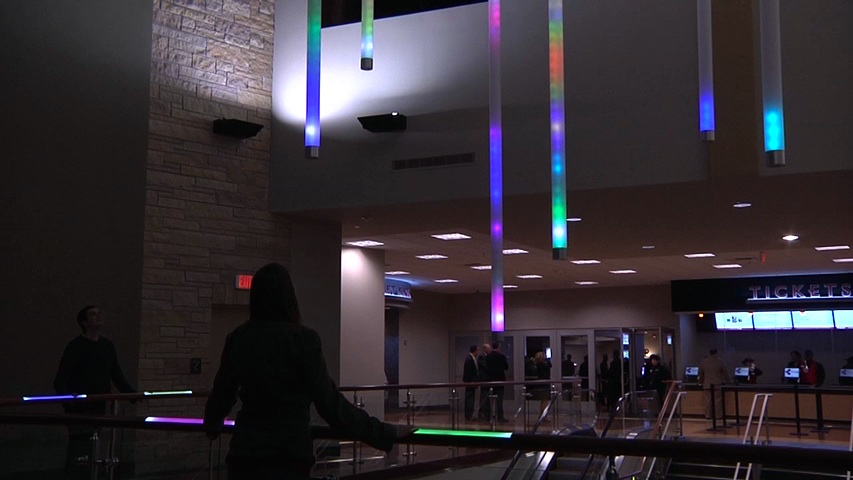 Aurora Organ is a contemporary meditation on the possibilities of translating human presence into light using digital technology. Commissioned by Forecast Public Art for the City of St. Louis Park, Minnesota, the site-specific and interactive sculpture is installed in the 80 ft tall atrium of the Showplace Theaters, located at The Shops at West End in St. Louis Park. The piece combines custom software, full color RGB LEDs, touch sensors, and traditional sculptural materials to create an intriguing experience for theater-goers, where small gestures of touch translate to animated architectural-scale patterns of light.

In the Aurora Organ sculpture, six columns of light hang at various elevations above the theater’s grand stairway entrance. On the second-floor landing, six illuminated glass sensors are inset in the wooden hand railing and cycle through a palette of colors, beckoning viewers to approach. Each time a person taps or touches a railing sensor, a band of its current color is added to the corresponding column.

The colors in each column animate in various ways – moving faster or slower, up or down, depending on how people tap or touch the railing. Holding the railing sensor creates a long streak of color, while tapping creates shorter bursts. New colors overlay and blend with previous patterns, visually merging past and present activity at the railings. If all six sensors are touched simultaneously, general properties of the system, like gravity, are reversed – causing a major change in the behavior of all the colored elements. Each column of Aurora Organ becomes a temporal history and amplified visual trace of people’s presence and activity in the atrium.

(In addition to the photos of the finished piece to the right,  Alan H. Davidson’s flckr stream has many great photos of the installation process. Thanks Alan!)